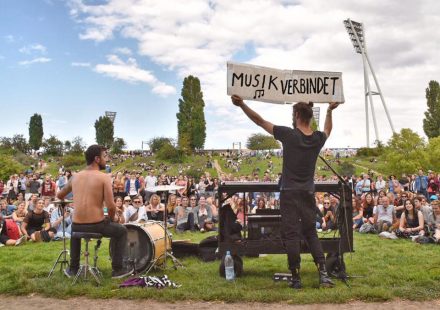 For many years now, Mauerpark has been a popular meeting place on Sundays for local people, visitors, artists and street musicians. The flea market and karaoke are key features, but it is the street musicians who play a major part in the character of Mauerpark Sundays.

For several weeks now, musicians who have been able to play undisturbed for years have had to put up with residents reporting them to the police, in some cases resulting in them being charged with public nuisance offences and having their equipment confiscated.

A number of visitors to Mauerpark, local residents, and musicians have got together to work creatively and constructively. To draw attention to the situation, they invite you to join them at a demonstration on Sunday in Mauerpark under the banner “Music connects!”

Mauerpark is an unique meeting place for people of different cultural, generational and social backgrounds.

Music constitutes a fundamental part of legendary Sundays at Mauerpark.

No gentrification of Mauerpark!

At the moment, at the initiative of single residents, many musicians are being consistently reported to the authorities and kicked out of the Mauerpark.

Join us for cultural diversity of Mauerpark!

We are the visitors, the residents and the musicians of Mauerpark, and we join our forces together in support
of its creative richness and music.