Invitation to the opening of the rainbow playground 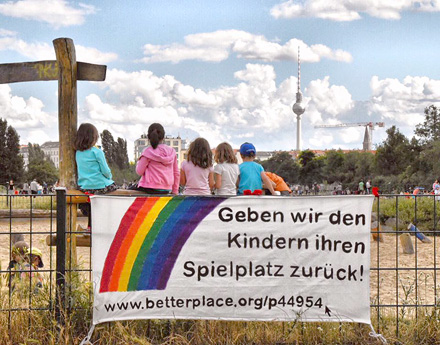 A promise is a promise: we got the rainbow back!
And not only do we have a new rainbow, we also have a play ship – an ark complete with giraffe.

We would therefore like to invite everyone who supported us financially and practically and, of course, the children and their parents to come and celebrate this special moment with us.

Anyone who believes that rainbows simply fall out of the sky is sadly mistaken. Turning this dream into reality was a long process and it wasn’t always easy. But the process was as important as the result and lots of people got to know each other and appreciate each other along the way. We reached our goal through a concerted effort.

The original rainbow failed a safety inspection. The local authority didn’t feel able to repair the ageing playground and sent in the chainsaws. We channelled our outrage into a constructive approach to the problem: build a new rainbow in the same place. But there was just one problem – the local authority didn’t have the money to do it. A joint effort on the part of the playground designers and equipment manufacturers SIK-Holz, the Friends of  Mauerpark, the local authority, the  many people who made generous donations and,  last but not least, a host of volunteers resulted in a new playground being built.

The first phase with the western section of the rainbow and a swing was completed in summer 2016 and now in summer 2017 the eastern part of the rainbow and the new play ship have been added. All that remains now is to dismantle the last of the barriers and celebrate the official opening of the Rainbow Playground to the public at 3.00 pm on 14 July 2017.