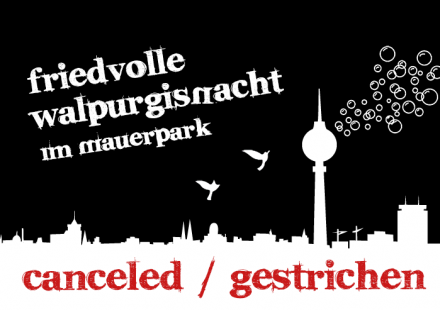 For the last 15 years Mauerpark has enjoyed peaceful celebrations to dance in the May. This was made possible by the hard work and commitment of artists and neighbours. This year, the celebrations have been cancelled as a result of complaints by residents.

After so many years, the excellent collaboration between Pankow Council, the police and volunteers has come to an abrupt end. Pankow Council and the police are no longer willing to turn a blind eye to these peaceful and uncommercial celebrations in their established form and time frame.

Fearing possible complaints from residents, the police have announced tough conditions and restrictions for the celebrations. The Peaceful Walpurgis Night team has therefore pulled out of any further involvement. It cannot see how it will be possible to guarantee peaceful and creative celebrations in Mauerpark without music.

Mauerpark had become a magnet on Walpurgis Night for “young rioters,” who came from all over Germany to pick a fight with the forces of law and order. The peaceful celebrations were initiated by residents in 2004 as a creative response to this – a response that worked for 15 years. Now a group of residents trying to prevent any kind of “noise” in Mauerpark have put an end to it. The team regrets this development and calls for more appreciation and support from the authorities and the other residents.